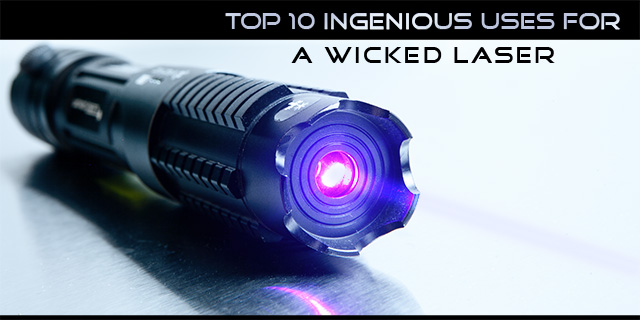 A few of our recent projects here at the Brown Safe Research Labs have included the integration of lasers for a variety of….shall we say….unconventional uses. Our involvement in this often unexplored technological “multi-tool” of sorts has prompted us to explore a few additional uses that could apply to many different fields.

Once relegated to the sphere of sci-fi fanatics, lasers are now becoming more and more commonly deployed by field operatives for a number of special purposes, unique to their profession.  The systems in use are normally built using military grade parts and procedures, and as such, can be sometimes difficult to transport and deliver to remote destinations without drawing unwanted attention. It’s for this unique situation we thought to assemble this handy guide and provide examples of how a laser can become a specialty tool used to perform a variety of unique functions when combined with more readily available components. Each one of these outta-the-box uses center on one of the most powerful handheld lasers available, the Wicked Laser Arctic.

We chose Wicked Lasers due to their availability and their stellar base of supporters.  Wicked Laser produces highly popular and powerful lasers that can often be acquired from even the remotest of locations across the globe. Yes, there are ruggedized lasers that can perform each function defined below optimally, but the point of our exercise was to determine just what type of creations could be produced using the proverbial toothpick, chewing gum, and a 1,250mW Laser.

So without further ado, here are the results of our labor.

Caution: A 1,250mW laser is EXTREMELY dangerous; none of the designs below should be attempted by anyone other than trained professionals who fully understand the inherent dangers. The below information is purely informational. If you’re pondering whether you may be a trained professional, you’re not.  Do not attempt to build any of these tools. 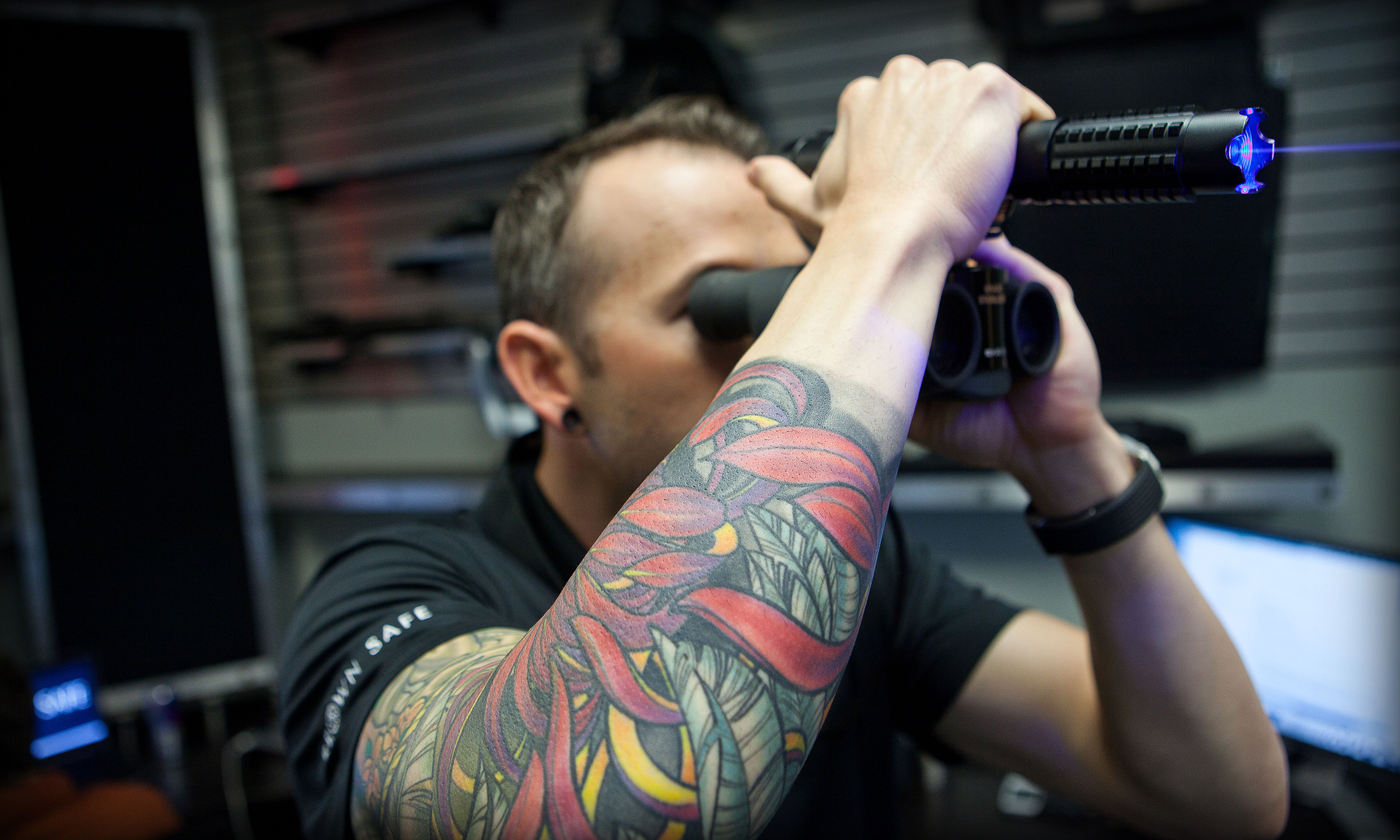 The setup shown here is good for communication at relatively short distances out to 2 miles. For longer ranges, a sighted and calibrated telescope would be better suited and can be good out to a range of 6,856 meters, possibly more. Although, it’s absolutely imperative to note that attempting to use this setup at distances less than one mile can risk damaging the eyes so should never be attempted.

The shroud shown above reduces visible side scatter. And if both corresponders are equipped with NV specs, converting the laser to infrared is a major jump in your private party line.  Check out this tip off link on how to convert a laser to infrared. 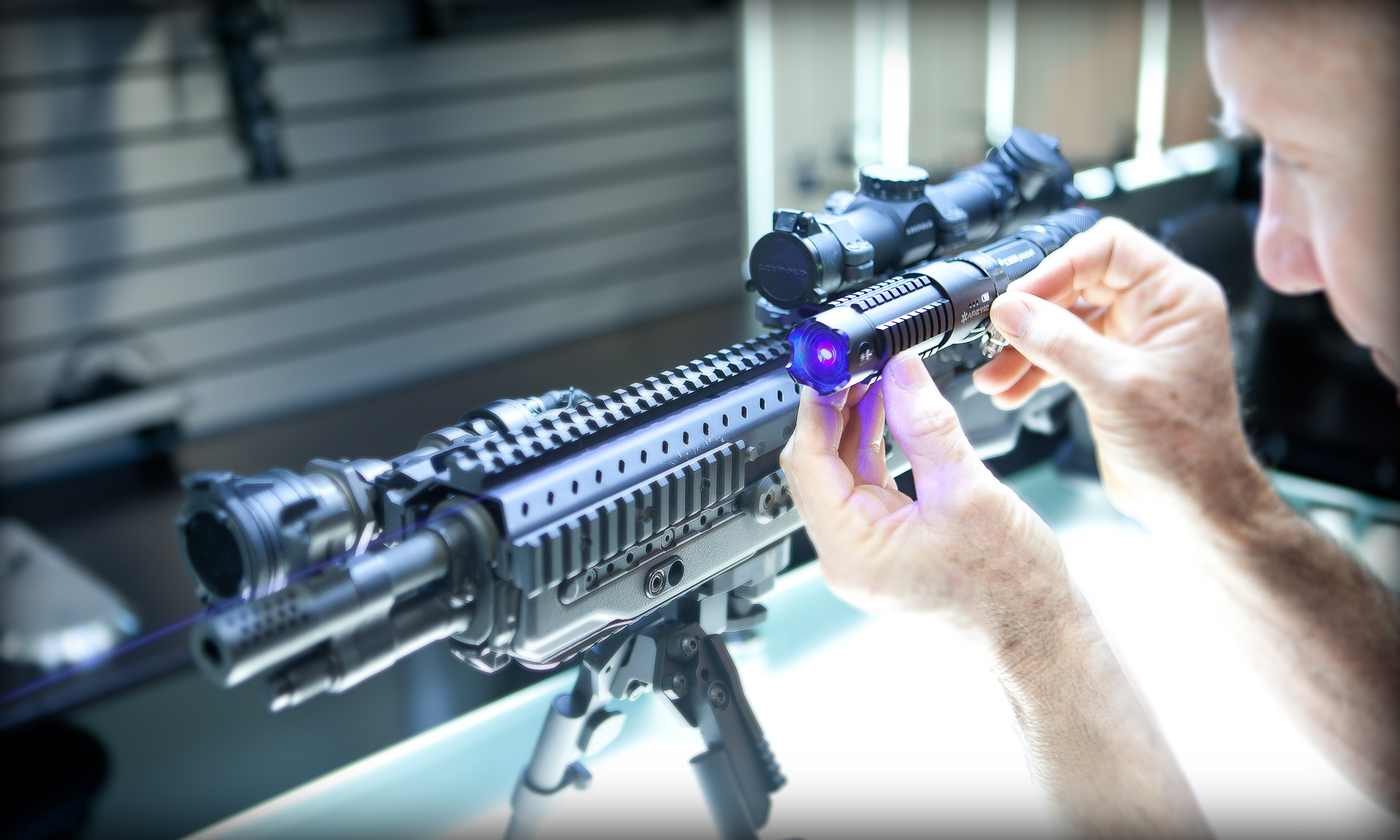 The Arctic by Wicked Laser includes an optional lens set that greatly expands its possible uses. In this setup, we’ve employed the Wicked Laser flashlight lens to open up the beam, allowing the laser to function as a high power weapon light, providing proper low light identification of targets out to the 800 meter range limit of the weapon it is mated to; which in this case is our highly customized trusty Brown Safe M1A Socom II. On exceptionally cloudy dark nights, we estimate this designator to be effective out to 400 meters.

The use of lasers for nighttime shooting over flashlights is gaining widespread acceptance and is set to overtake the use of traditional lights within a few short years. The 50mW Laser Genetics ND-3 x50 is the current laser designator of choice by hunters and military alike.

But be warned, using a wicked laser in this fashion will greatly reduce the unit’s lifespan as they are not built to withstand recoil abuse. 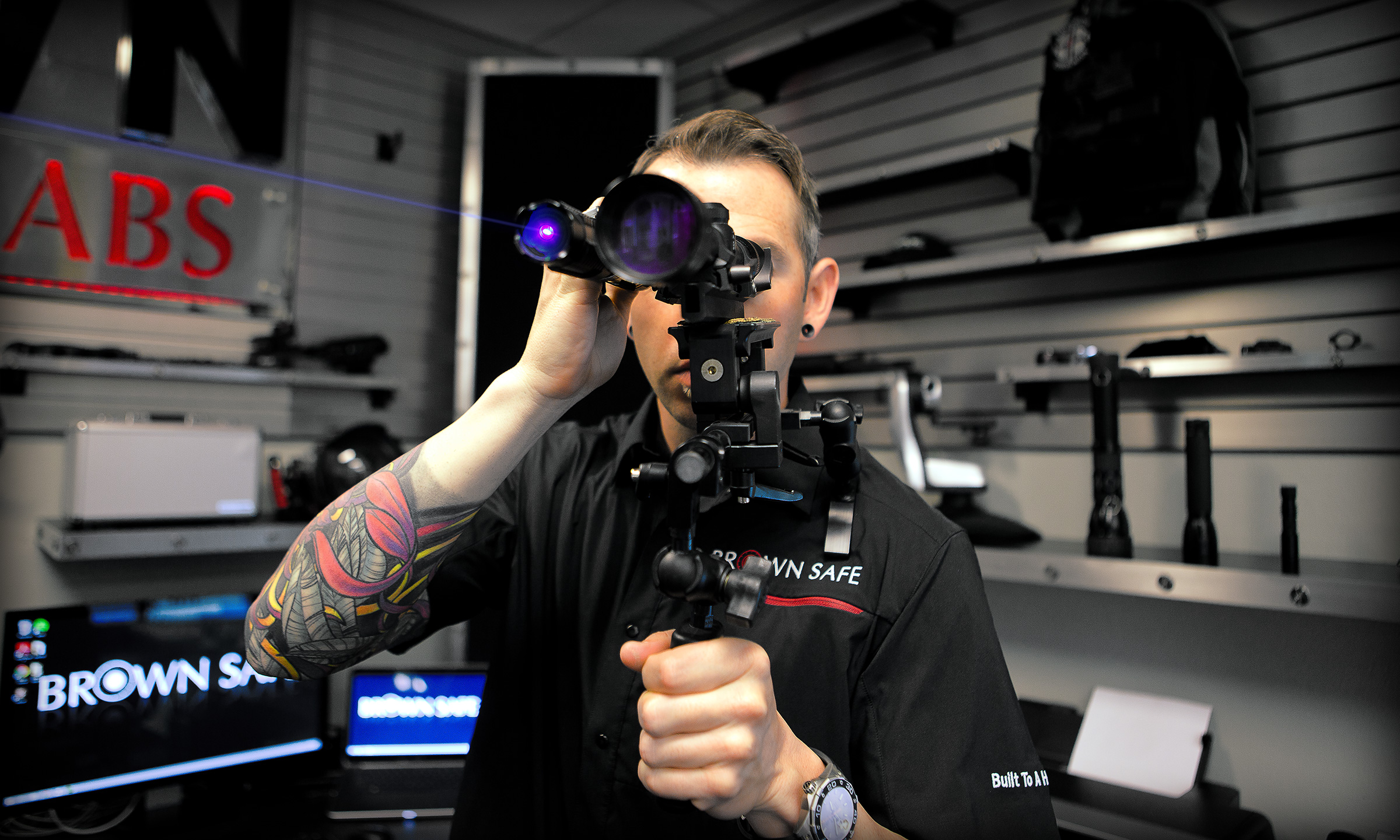 This is another configuration that benefits from the optional lens set. “X” marks the spot. The Crosshair lens paints a nice identifier on any unlucky target out to 200 meters, allowing for rapid identification by friendly forces. The default lens is best for target ID past 200 meters.

Throw in the IR mod and you’ll ensure an unsuspecting target remains unsuspecting. When properly sighted, the tactical scope allows the operator to precisely target without the need for NV gear. 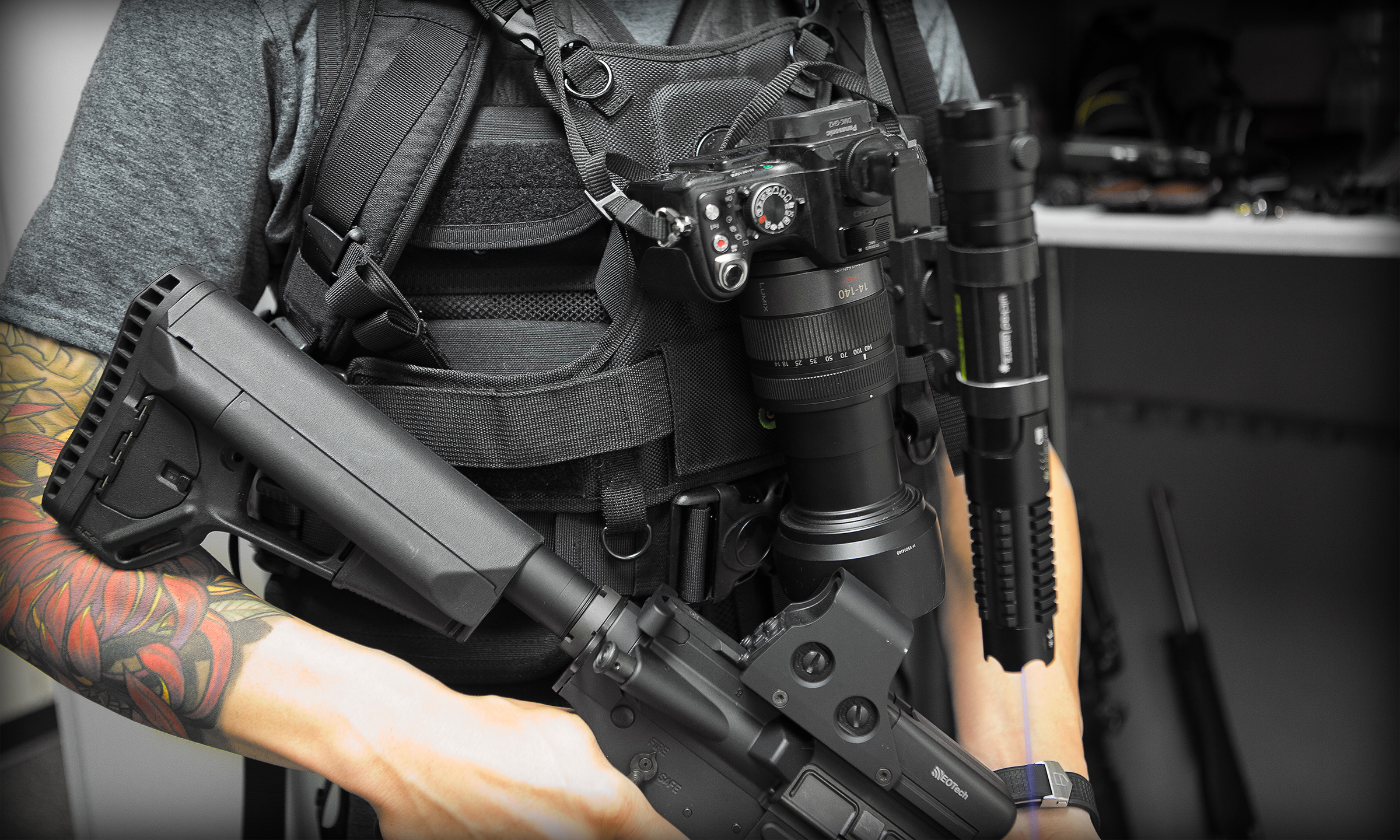 For those combat and action photographers, a high power laser can prove highly beneficial when attempting to film or photograph less than cooperative subjects. The configuration shown allows for run and gun style shooting from the shoulder or the hip, even during broad daylight. Simply point in the subject’s general direction, align the red dot over the subject, and squeeze the shutter button. Great for around-the-corner shots as well. A word of warning, though: Best to avoid snapping off any sentimental shots of those on your own team as they may shoot back, with their remaining good eye.

Note: the Geneva Convention frowns upon the intentional use of lasers for blinding on the battlefield. 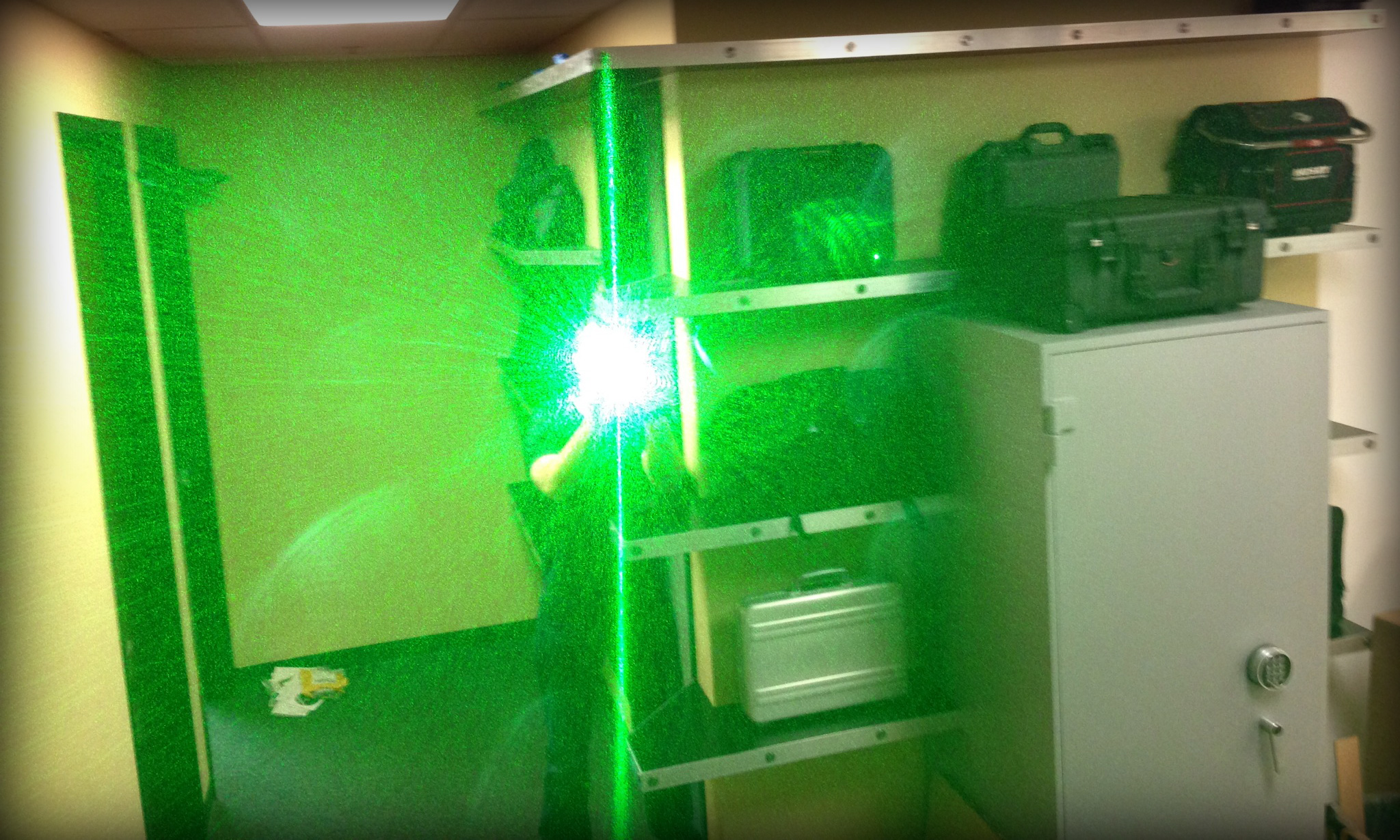 For those operators in need of a more subtle approach than the more conventional “whack attack” or “shoot it” mindset when it comes to deactivating surveillance cameras. A standard laser, like the one shown here, provides the ability to temporarily impair a surveillance camera in complete silence. A 1,250mW laser can permanently disable a camera, even from a good distance.

As it turns out, our IT dept. wasn’t too keen on the idea of us taking out our own surveillance cameras for the sake of showing that it could be done. Apparently they’re pretty positive the 1,250 milliwatts coursing through the Wicked Laser Arctic would do more than enough damage; so we opted to produce the above image example using a camera friendlier 5mW weapon laser. 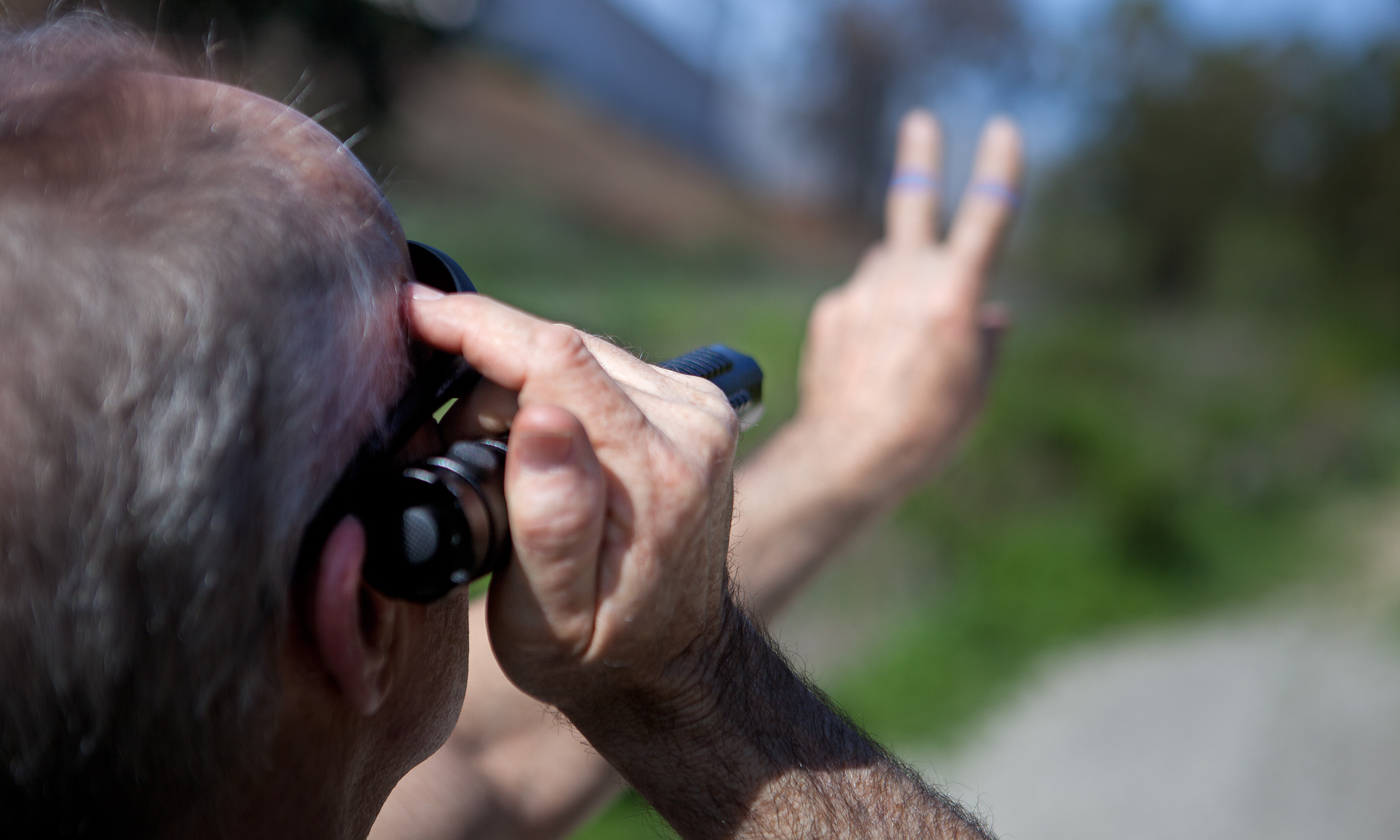 While an IR beacon can prove useful for nighttime recoveries, signaling your location to an approaching winged escort in daylight can prove trying. And the old flash-a-mirror-trick is a little less reliable than the movies lead you to believe. Instead, use two fingers to sight in your target, and with the aircraft positioned between your fingers move the laser back and forth to catch their attention.

Using the Wicked Laser’s optional line lens converts the laser beam into a broad line, perfect for long distance signaling to friendlies for those planned or sometimes unplanned rapid extractions. 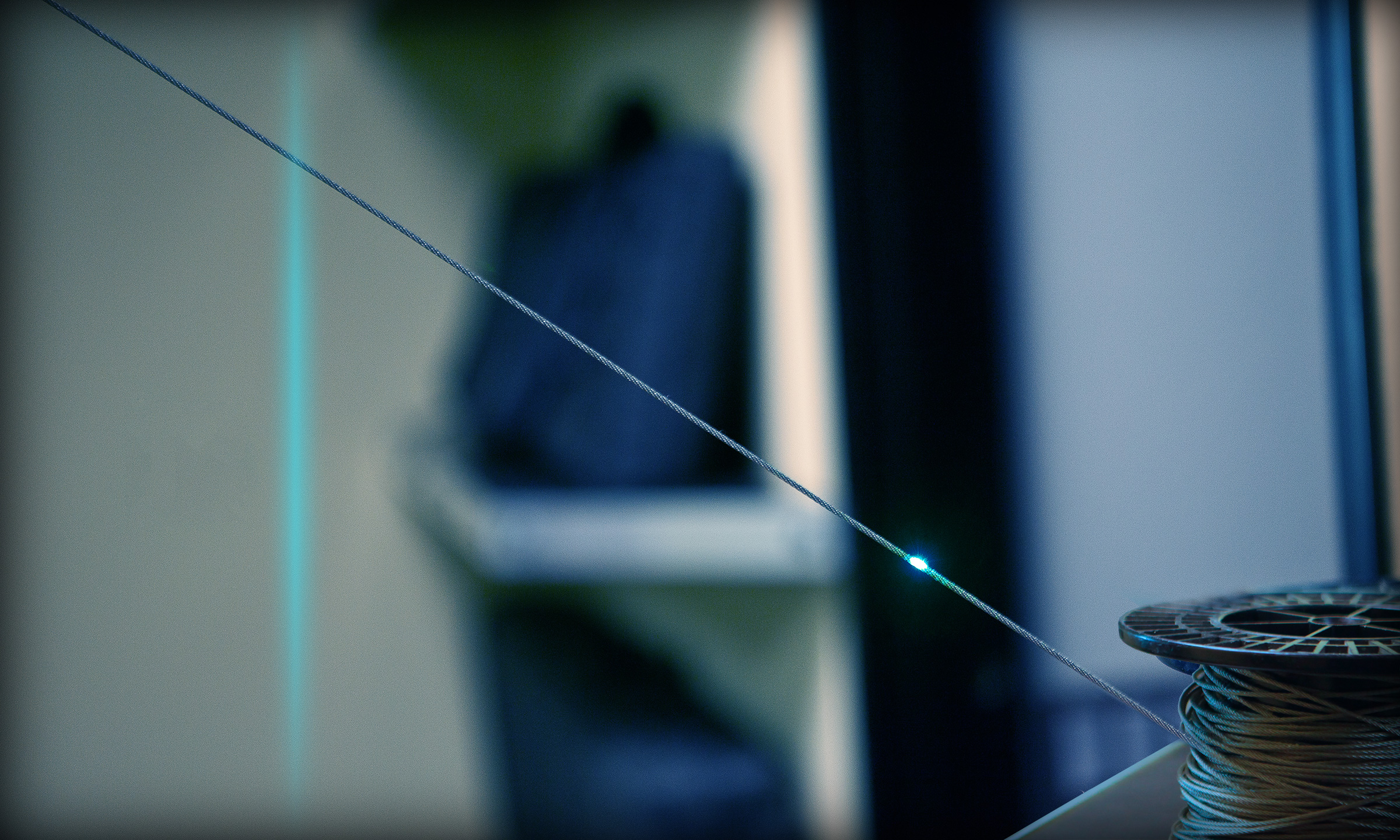 Defying the feared tripwire with yet again a simple mod to the Wicked Laser. Simply affix the line lens to this all-in-one device and never fall victim to booby traps or triggers again. A simple horizontal swipe with the vertically aligned laser line and any ill-bent filament will shimmer to your attention. Good in both dark and daylight situations.

Well, we seem to have run out of time on this alluring topic as more pressing work is vying for our attentions. We were hoping to explore and arrive at 3 additional laser uses for this segment; perhaps we’ll have the opportunity to revisit it later to flush out the whole ten. Until then we leave you with these parting ideas: Self Defense, Remote Detonation, and Emergency Wound Cauterization……..mmmmm, tasty!

What other ingenious uses for a hand held laser can you dream up? Use the comments section below to share your ideas.

Need some help? Here are a few helpful links: