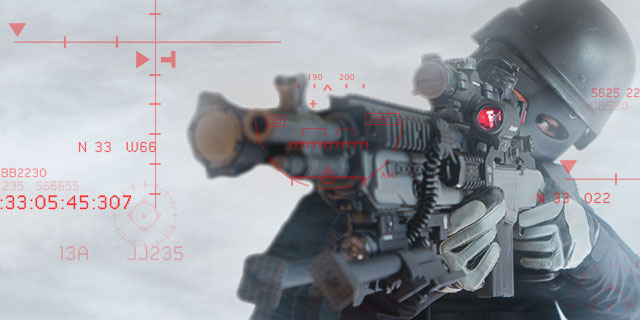 Here at the Brown Safe Research Lab we have just completed our most badass battle rifle to date. This beast is based on the already highly capable M1A Socom II from Springfield Armory, but our version has undergone an extreme makeover at the hands of the Brown Safe Ballistic div. to transform it into this custom battle rifle for extreme engagements. 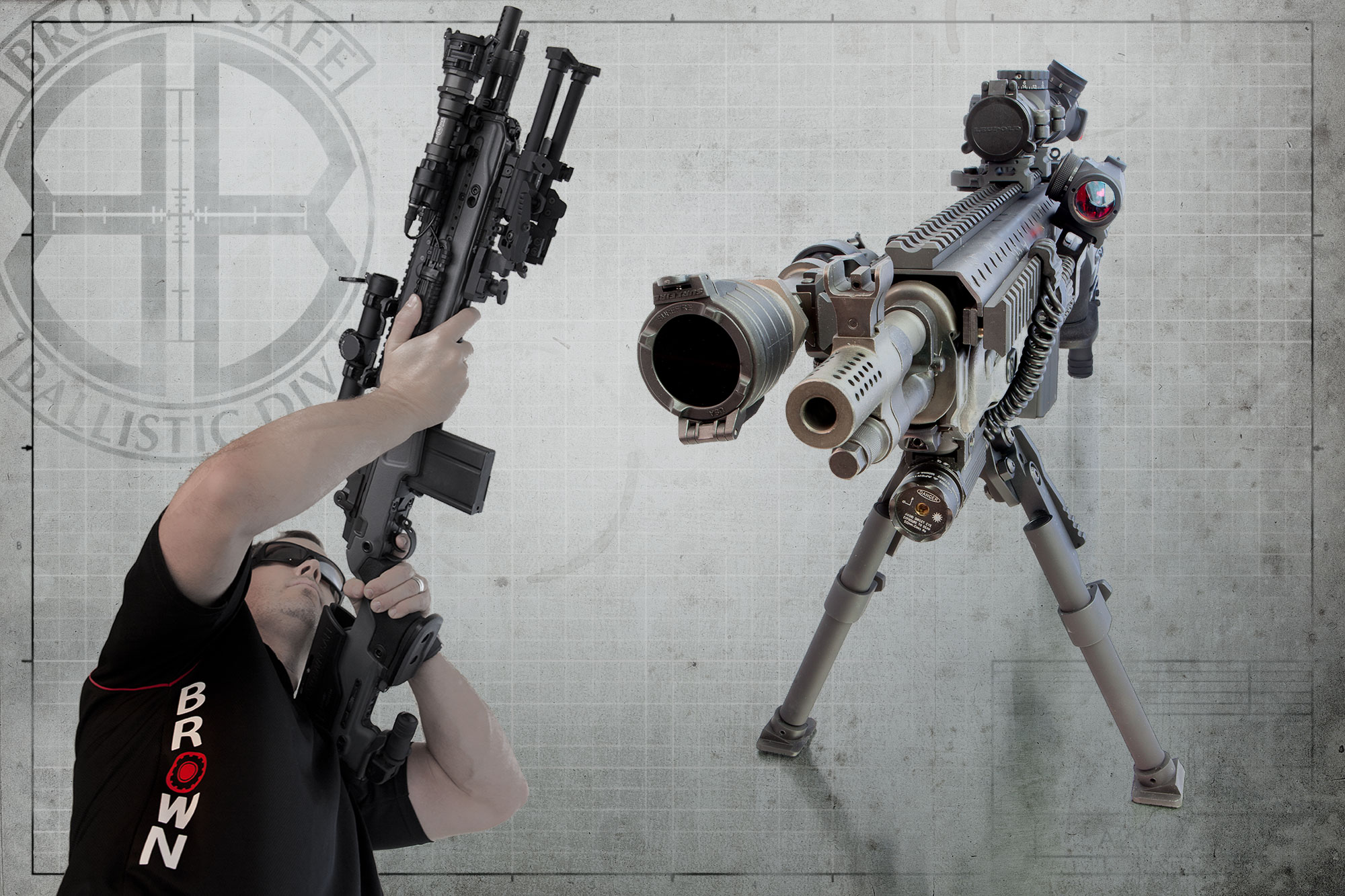 Springfield’s Socom II is the highly evolved close quarter version of their popular M1A rifle. The M1A, or its military counterpart the M14, is an iconic rifle that Springfield Armory first began producing in 1958. The powerful M14 made use of the heavy-duty 7.62mm round  and became the standard issue rifle of American soldiers in Vietnam. The enhanced power of the weapon meant superior stopping force and unmatched range. However, many soldiers complained that the 22” barrel and heavy weight made it difficult to easily maneuver through the jungles of Vietnam, and the traditional wooden stocks were prone to swelling in the wet and hot climate which affected the rifle’s accuracy. Although it is no longer the standard issue rifle for American soldiers, variants of the M14 are still used throughout the Armed Forces today, especially as sniper and designated marksman rifles because of its long range accuracy and effectiveness.

Throughout its storied lifespan the M14 platform has evolved into the multiple variations available from Springfield today. One of these variations is the Socom II, created in an effort to alleviate some of the problems associated with the earlier generation M14s. The intent when creating the Socom II was to maintain the weapons legendary abilities as a battle rifle while incorporating features better suited to today’s close quarter combat scenarios. The barrel has been shortened to a 16” configuration  to reduce the overall length of the weapon and aid in maneuvering in tight spaces. While the modified gas system has been tuned to make the shorter barrel system function with the same reliability of its 22” counterpart. Muzzle rise is tamed with the addition of Springfield’s proprietary and phenomenally effective recoil compensator, greatly enhancing shootability through accurate follow-up shots. The stock is formed from a robust synthetic polymer which eliminates the problems associated with the traditional wood stocks and the addition of multiple picatinny rails enhances the versatility of the rifle by accommodating various optics, lights, and accessories. 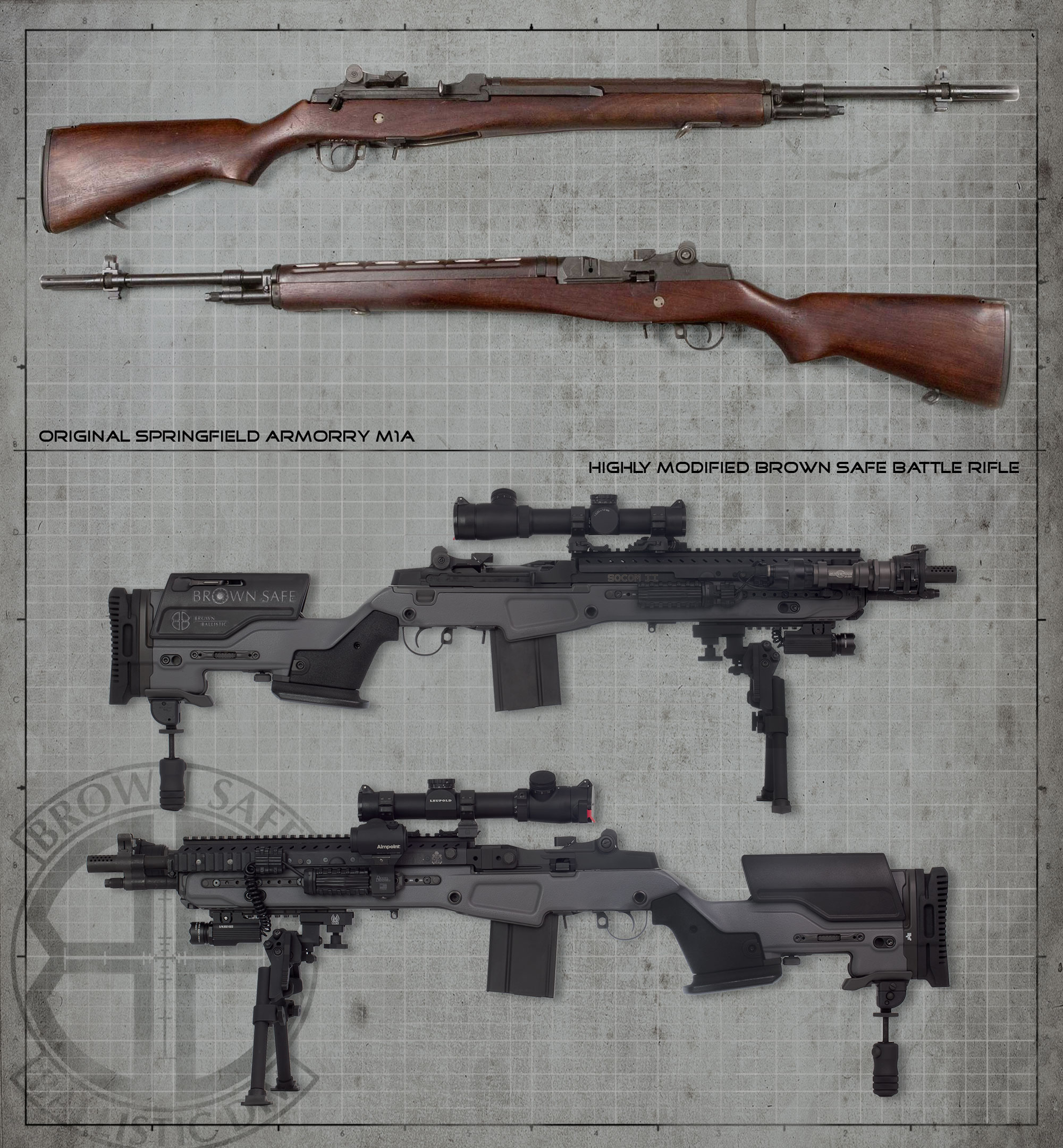 The Socom II is undoubtedly one of the most capable production rifles on the market today, but still needed some modifications to fill our requirements.

At Brown Safe’s Ballistic division, we were charged with creating an improved battle rifle based on the M1A/ M14 platform. One that would be a highly effective close quarter mayhem machine while conversely being capable of rapidly neutralizing multiple threats out to 800 meters. 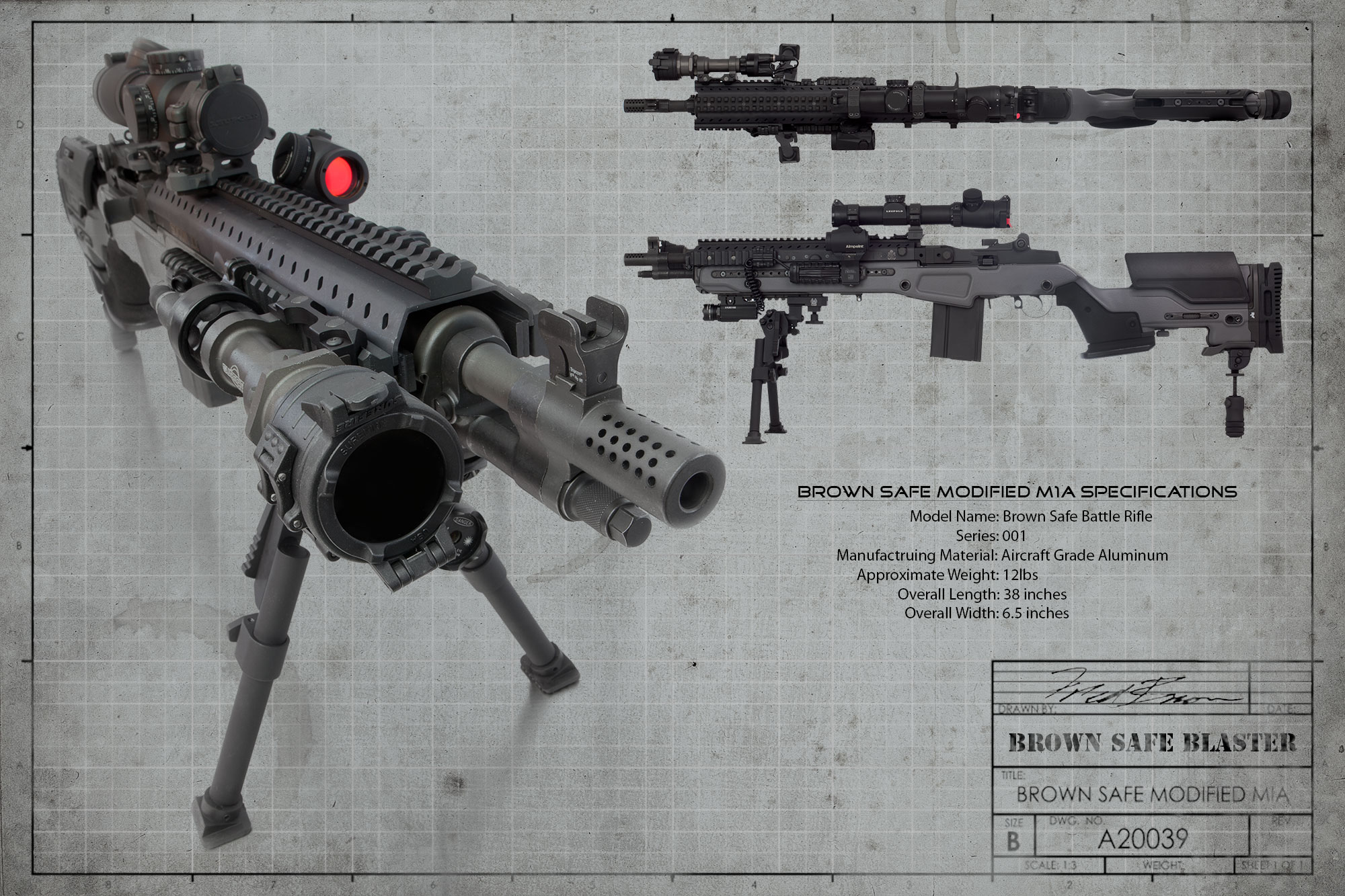 We decided to start by lightening the weapon while increasing its accuracy. We contacted J. Allen Enterprises, well regarded within the tactical community for producing flawless stocks for M1A and Remington 700 rifles. True to their reputation, J. Allen provided us with a custom JAE-100 GEN 3 precision rifle stock machined from a single piece of aluminum, a true work of art.  Many riflesmiths advocate the pillar bedding method to gain the most accuracy from bolt-action rifles and by precision CNC machining the stock for an extremely solid metal-on-metal fit, we’ve created a pillar bedded interface for the barreled action. In addition to the reduced weight and increased accuracy of the new aluminum stock, it also provided us the opportunity to add a few more components to satisfy our requirements. In its stock form the Socom II is primarily designed to be run with iron sights and the buttstock does not accommodate the proper cheek weld necessary for long range optics. So, with the new stock design we used the opportunity to add an adjustable cheek rest for a solid cheek weld that would enable better sighting through the Leupold Mark 4 1.5-5x20mm MR/T M2 Illuminated Reticle Riflescope we planned on mounting on the top rail. We also added a monopod at the rear along with a folding bipod up front to accommodate multiple accurate shots out to 800 meters in rapid succession. With the long range requirements satisfied we turned our attention to those things that would make this rifle a beast in close quarter battles. Firstly, because we planned on running the medium/long range optic on top and didn’t like the idea of removing or retracting it before engaging threats at close range, we added a secondary close quarter site in the 1 o’clock position. By mounting an Aimpoint Micro T-1 hollow sight to the side rail through the inclusion of a Daniel Defense 1 O’clock Offset Rail, we are able to rotate the weapon slightly to acquire the target all while still maintaining a firm cheek weld and never removing our hands from the weapon. This also enables the operator to seamlessly transition back and forth between sighting in close and long range threats with ease. An effective variation on this aiming method is demonstrated through the below video provided by Viking Tactics.

Secondly, although we had substantially reduced the weight of the Socom II with the addition of an aluminum stock, the rifle proved too hefty to hold in an engaged position for an extending period of time. To counteract operator fatigue we installed a VO Blackout 100 milliwatt green laser under the barrel allowing the weapon to be accurately fired from the hip during close quarter confrontations even in full daylight. 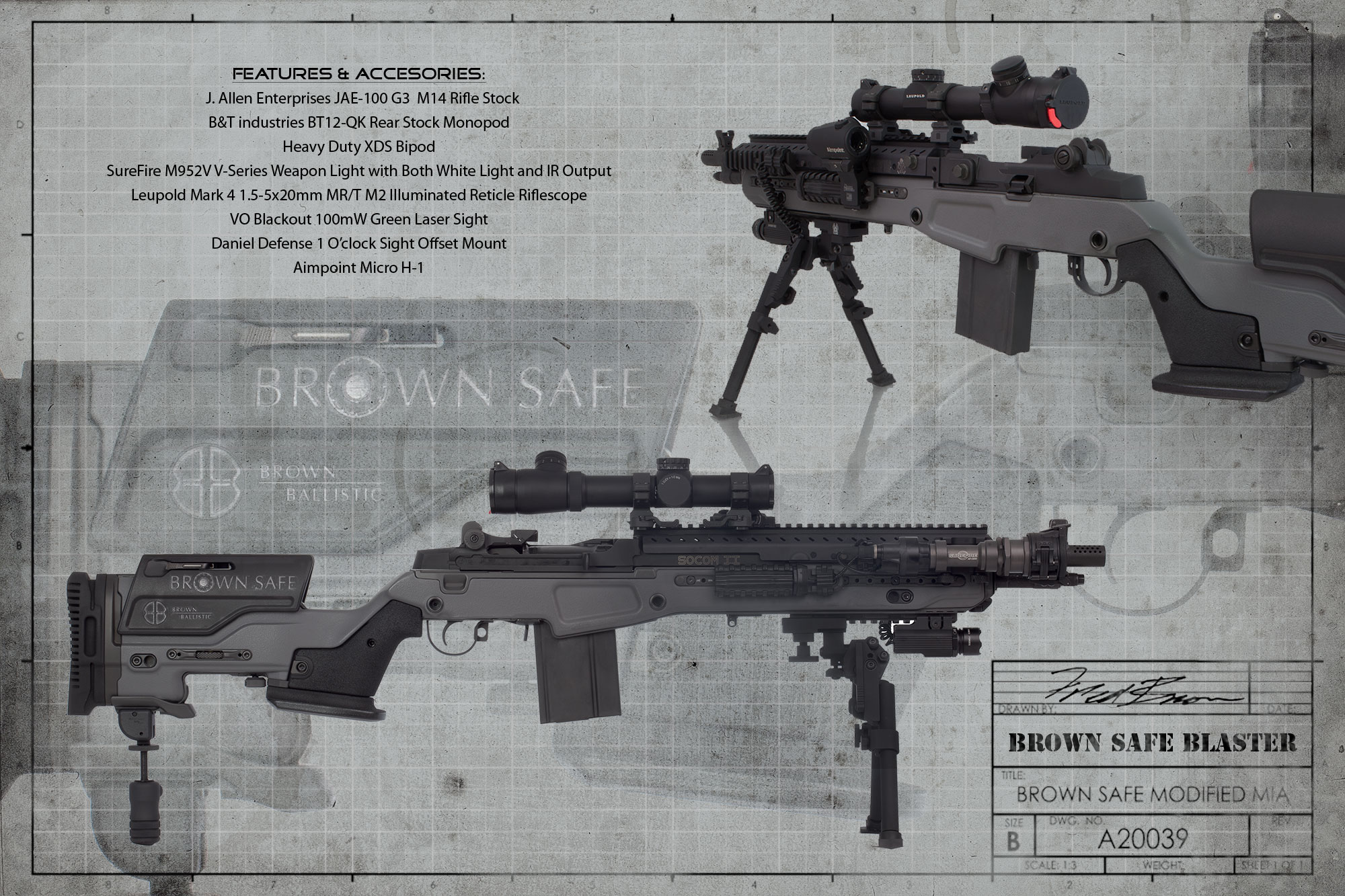 We feel the completed weapon may just be the perfect battle rifle for extreme engagements.

Protect Yourself and Your Family By Always Using High Security Safes

Hardcore weapons like the one featured in this article are perfect for keeping your home safe and purpose built to perform their job flawlessly when the time comes....just like the many quality Brown Safe gun and home safes. However, many people forget about the importance of keeping weapons like this safe. Protect yourself and your family by always locking your weapons inside any one of the many high-security safes available from Brown Safe.