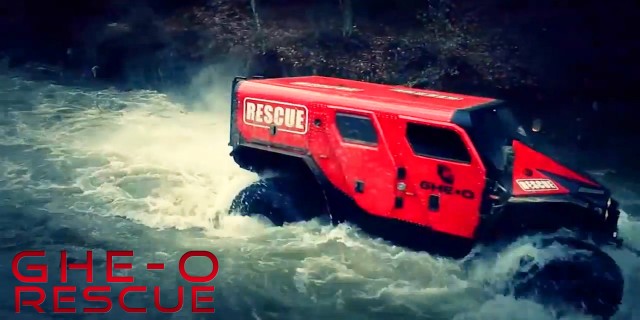 Outrageously awesome autos always grab our attention, especially if their function exceeds their ferocious form. In this case, it’s the ability to conquer the harshest of environments and the extreme function of this beast which makes it the ultimate rescue rig. Meet the Ghe-O Rescue, an absolute monster of a machine built by Ghe-O Motors out of Bucharest, Romania. The team at Ghe-O is known for making high performance off-road race cars, but has developed their aptly named Ghe-O Rescue especially for the military and first responders.

What looks to be a Hummer on steroids is actually quite a bit more. While it retains the no-nonsense boxy looks, it’s actually substantially larger with substantially more ability (and we all know the Military’s favorite vehicle is no slouch when it comes to off-road ability). The Ghe-O Rescue can be equipped with everything from stretchers and a rescue sled to a snow plow, tracks in place of rear wheels,  water tank for firefighters, and even pneumatic pillows on the wheels for deep water or snow crossings.

Combine these heavy duty add-ons with a robust transmission with lockable axles and your choice of either a gas powered engine pumping out 500bhp or the diesel version capable of 304bhp and you’re ready to conquer just about anything. Have a look for yourself….it’s mighty impressive.

This entry was posted in ESCAPE, INFILTRATE and tagged rescue vehicle, tactical vehicle. Bookmark the permalink.