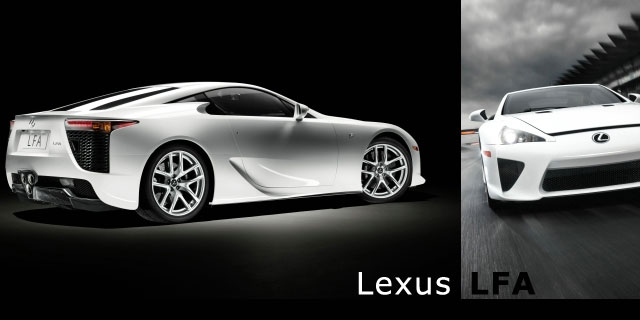 Luxus’ first supercar, the LFA, is receiving rave reviews for its driving dynamics and performance. The 4.8 Liter V10 produces 552 hp and is cabable of a top speed of over 200mph, propelling it from zero to 60 in a mere 3.6 seconds. However, with a starting price of $375,000, opinions range from “worth every penny” and even “bargain”, when compared to its carbon fiber composite counterparts the Ferrari Enzo and Mercedes SLR McLaren; but some critics are unsure it’s worth more than three times that of the Gallardo or the LFA’s faster and less expensive Italian counterpart, the Ferrari 599 GTB Fiorano.

The real critique from most enthusiasts is that it has taken far too long to reach production. With a development, to concept, to production timeline that reaches nearly a decade many Lexus aficionados are faunching at the bit to bridle the LFA’s 552 horses.Although now that production has began on the Japanese made supecars, the soon to be proud Lexus LFA owners won’t have to wait much longer for their 1 of 500 Lexus LFAs.

This entry was posted in ESCAPE. Bookmark the permalink.