Luke Richards is a man that knows sports cars well, and at one point or another has owned just about all of them. So he is intimately familiar with the problems and short comings of each. In response, Luke set out to create the perfect sports car that would bridge the gaps where other manufactures had come up short, and upon laying eyes on his LC470 the usual response is overwhelmingly… love at first sight.

Luke’s story begins in England where he was born, to an English father and American mother, and growing up he quickly became enthralled with sports cars and performance machines of all sorts. This passion was more than likely passed on by his father who always had a sports car of some kind. However, the small European sports cars his father owned throughout the years left Luke desiring more. As a teen living in the U.S. he was introduced to large American V8s. Although these behemoths were fast and loud, he found their heavy and clunky nature really didn’t perform all that well despite their horsepower and rumbling. Thus the search began for a machine that gave him the best of both worlds, the driving performance and corning of the small European automobiles with the speed and power of American muscle.

This search landed him a job working as a lock kid for a car dealership while in high school, and eventually becoming a trusted confidant of the owner while the dealership grew and blossomed into one of the nation’s first auto-malls with over thirty dealerships. During this time he witnessed the inner workings of the car business and all that was involved with growing a successful company. In his early twenties his search led him west where he became a pilot, flying all manner of aircraft while living in Colorado. Flying and working on planes was a great experience where he learned a lot, but always knew it wasn’t the career path he wanted for himself. Eventually he landed in San Diego selling rare and vintage sports cars. His passion and knowledge of these classic exotics grew and soon he was in business for himself hunting down hard to find gems and selling them to eager collectors. Before long his demand outpaced supply and he began transitioning to building and selling Porsche Speedsters. Forming a relationship with Chuck Beck, a man famous for his Porsche Spyder replicas and race car designs, Luke began importing  and selling the highly sought after Speedster automobiles. However, the beautiful and classic looking machines still didn’t have all that Luke was looking for in the perfect sports car.

His search for the optimal blend of style, performance, and drivability had yet to be created. So, finally Luke decided it was time to design and build the machine himself. Founding Lucra Cars in 2006 he began working on his dream car, the LC470.

He procured the services and experience of Beck to embark on creating the brand new vehicle. This sports car would draw inspiration from the rich heritage of the 1958 Lister road racer and was to be all that lacked in any other high performance sports car. Chuck Beck’s experience in car design was perfectly suited for the new undertaking, and he had previously created his own version of the classic Lister design as well. However, Beck’s own version was a small cramped body design similar in size to the original Lister from the 50’s. Luke, who stands over six and a half feet tall, had his own design in mind and wanted to create a car that was larger and more comfortable. With a lot of work he created his vision of what the Lister should be, and in a scale that was more in keeping with a modern car.

Gleaning the experience and know-how of Beck, Luke successfully created a smooth and flowing body that followed the lines of the classic Lister, capturing the vintage aesthetic perfectly. The vehicle became known as the LC470, and its low-slung sleek shape made for a sports car that is both supremely aerodynamic and timeless in styling. To further maximize the vehicle’s performance and in keeping with its race bred lineage Luke partnered with a well known NASCAR frame builder to engineer the LC470’s chassis for the single piece carbon fiber body to rest on. During the frame design special attention was paid to the weight distribution and balance for optimal traction and maneuverability. The result is a performance machine that handles like it is on rails, and if the driver is willing the LC470 is plenty capable of pulling over a G while cornering.

The LC470’s staggering performance is due to the ability for all of the individual components to seamlessly work together, and at the heart of each of these refined performance machines lies a powerful fire-breathing engine. The lucky owner of one of these beauties can choose from one of four engine choices ranging from the fun to drive 375 hp ZZ4 to an insanely powerful 630 hp LS7. Each motor is paired to a custom Tremek transmission built specifically for the car. So, opting for the conservative 400 horse LS6 motor means this super car propels from 0-60mph in a mind boggling 3.4 seconds, all without the need to shift thanks to running a 2.87 first gear through a 3.07 final drive.

The LC470 is a modern sports car like no other. This car is a star, a celebrity in its own right with its own unique style and personality. When seen in person it evokes an almost primal reaction and Luke has dozens of hilarious stories to prove it. One such story involves him being literally hunted down by a certain celebrity after she passed his parked car in Hollywood. As he sat enjoying breakfast with some friends, he saw a woman outside intently pacing around his car. Which happens to be a fairly regular occurrence, except this particular woman had driven passed it on a busy street, then had to park her car 3 blocks and way, and walk back to gawk at the LC470. Although, the story gets even better when the woman, assuming the vehicle’s owner is inside the nearby restaurant, approaches the Maitre d’ to track down the owner of the captivating automobile. After being pointed in Luke’s direction, she promptly marches through the crowded restaurant and arriving at their table, removes her aviator glasses as she says, “Hi, I’m Sharon Stone. Now, is that your car?”

The LC470 is a beautiful and powerful looking car with an appeal that transcends age, gender, and time. When viewed in person it has an almost magnetic quality, its carbon fiber curves begged to be touched. One of the more peculiar stories involved an incident when a complete stranger opened the door and plopped down in the passenger seat next to him at a stop light. Luke recalls, “One day while driving around, I pulled up to a traffic light and stopped. A well-dressed business man was walking by, but all of a sudden he headed directly for the passenger door and got in the car.” Almost as quickly as it happened, he all of a sudden snapped from his trance, and the business man came too, then looked at Luke dumbfounded and said, “wow. what am I doing?! I’m sorry….but what is this thing anyway?!”.

After interacting with the LC470 in person it’s not so surprising to hear people having these reactions. The car simply draws attention everywhere it goes. People literally trip over and back into Ferrari’s and Lamborghini’s to get a better look at the LC470. Luke’s idea was to create a car that had everything that the other sports cars lacked. It had to have the looks and appeal, the style and appearance, the fit and finish, but ultimately it absolutely had to perform. And perform it does, it’s not just a little faster than its competitors, it is embarrassingly faster. The LC470 routinely runs away from the fastest Ferraris and outperforms Carrera GTs, Lotus’ and Lambo’s without a second thought. It is truly a one of a kind sports car. 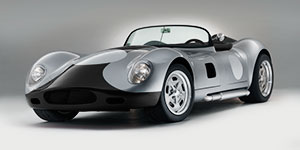